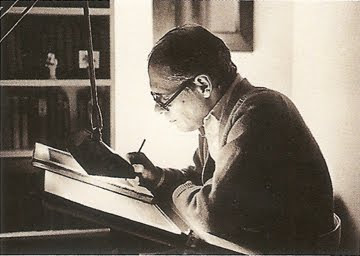 Charles Seliger (1926-2009) represents an interesting crosscurrent to the general trend lines of what is called the Abstract Expressionist movement. A first generation AbExer, albeit the youngest of the group, Seliger somehow managed to avoid the pitfalls of both the fame and the ridiculous obsession with scale that plagued so many of his contemporaries. Throughout a career that spanned seven decades, he was able to maintain a near monofocus on his interest, which, as he stated very early on, was to ‘apostrophize micro-reality’. 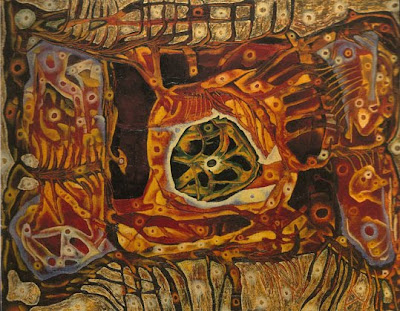 Creating small paintings that rarely exceeded 30 inches in any dimension, and were often much smaller, Seliger painted an intimate world of kaleidoscopic and biomorphic forms that suggest microcosmic life. In his own words: “My work, even when most abstract, reflects the natural world. Strata of the earth, forms relating to botany and biology and the ocean depths, all figure in the imagery of my work, no matter how abstract. The images are developed with a feeling for the intricacy of the structure of matter. There is a sense of something happening organically among the forms. The images are changing, there is suggestion of movement in the earth, of botanical development, always a sense of growth. A metamorphosis occurs.”

In his teens and early 20’s, Seliger developed a close association with two figures who would prove to be instrumental in his maturation as an artist. Seliger first met Jimmy Ernst in 1943 at Peggy Guggenheim’s renowned Art of this Century gallery, where Jimmy was Peggy’s secretary and where Seliger had his first one man show in 1945 at the age of 19. On the first day that they met, Jimmy, after seeing one of Seliger’s paintings, suggested that Charles look at the British publication, London Bulletin, that presented the work of European Surrealist artists like Jimmy’s father, the German painter Max Ernst. The work presented in this magazine, particularly that of Max Ernst, had a profound effect on Seliger and it was through careful study of these Surrealist paintings that Charles began to develop a painting method that used a variety of automatic means to generate a range of unpredictable and non-preconceived naturalistic imagery. It was these processes and the imagery that emerged from them that would serve as the bedrock of his work for the rest of his career.


It was also during this early period that Seliger encountered Mark Tobey, a Pacific Northwest artist. Tobey, a Bahai, painted on a small scale and with a certain Eastern philosophical or mesmeric/mystical approach that connected to Seliger’s ethos. Tobey had quite an effect on many New York artists of the day, particularly Jackson Pollock, who made a habit of attending all of Tobey’s Willard Gallery shows in NYC, and whose most characteristic work appears, at times, to be simply a scaled up and sped up version of the intricately woven and near-etched paintings of Mark Tobey. But for Seliger, Tobey’s influence was more ingrained. Seliger, through Tobey, must have seen a legitimate alternative to the large scale, often breezy, paintings of the day in NYC, a way of painting that allowed for an attachment to the subject that was intimate and not distant, reflective and meditative, not concept or ‘action’ driven. And the small scale and finely drawn elements in the work of both Seliger and Tobey encourage a certain reflectivity on the part of viewers as well, in effect willing them to stand very close to the work, and to peer into it as one would into a telescope or microscope.

Seliger lived most of his adult life in Mount Vernon, New York, where he maintained a full-time job at Commercial Decal for 5 decades. He painted at night when he returned from his job and, working slowly and steadily, often produced no more than 10 paintings a year. From 1989 to the present, Charles Seliger has been represented by Michael Rosenfeld Gallery on 57th St. in NYC.

“'I need not be afraid of the void. The void is part of my person. I need to enter consciously into it.'  This is a quote from Paul Tillich… It struck me that it is this void I enter when I paint… by making it a part of yourself one can then deal better with the despair. For me the void is the endless changing-changeless world of organic being. Becoming from this void, I try to extract (from my experience during the process of painting) some visual evidence of what I see or feel in the void. No matter how I plan a painting, or try to work the concept out in advance, I fail. Only when I enter the painting as a void where I know nothing but must retrieve from the void evidence of my consciousness – evidence of the struggle of the organism to become, to emerge… only to pass again therein is the never ending cause of despair… but one must carry the void within – and not fear but rather celebrate its beauties, ecstasies and endless complication… beyond our minds. I never seem to know where my paintings come from – or how they come about. One must look into the emptiness and the artist must not come back empty handed." – 1972

Nicholas Cairns is a painter who has exhibited in New York City, Philadelphia, Baltimore and Dallas. He lives in Baltimore with his wife, artist Elizabeth Wade. See his work online at www.nicholascairns.com.

Posted by Alexis Cairns at 7:00 AM