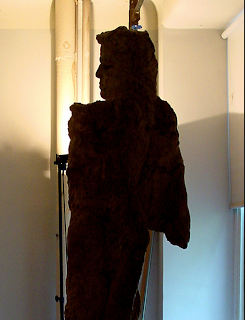 For most of his artistic life, Jonathan Silver worked in a crowded, third-floor loft space on East 4th Street in Manhattan.  "The 4th Street studio was an environment in itself when Jonathan was in it,” Marion Smit, Silver’s longtime assistant, wrote in an email.  “I spent quite a bit of time [there] in the early- to mid-eighties, sometimes helping Jonathan with various things or just sitting there listening and talking to him while drinking some of that delicious coffee/ heavy cream/ sugar concoction he used to make. Talking with Jonathan was always a pleasure. He was to the point and incredibly engaging, sometimes acerbic. He was erudite beyond belief and passionate.  His commitment to, knowledge of, and involvement with music and art was total. He lived it, he was in it. The studio was a physical manifestation of that. Literary passages, phone numbers, engagements were scrawled in pencil on the walls, chunks and shards of plaster and plaster dust covered the floor, various versions of 'Wounded Amazon', 'Eve',' Half Eve' were in the process of being worked or reworked, part clay/ part plaster, fragments scattered around, books here and there, and the piano in the middle of it all."

After Silver died in 1992, his wife Barbara preserved the space largely as it was when he was alive.  Over the years, she has admitted visitors by request—friends, former students, and admirers.  One of these admirers was the young artist Michael O’Keefe, who, in the early 2000’s, visited the studio twice, taking the photos included here.  (See all of O’Keefe’s photos here.)  In the text below, written in 2011, O’Keefe describes his experience. 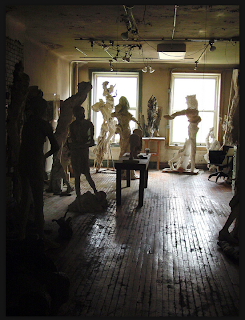 The first time I visited Jonathan's studio was well after his death, some time around 2001 or 2002. Barbara Silver graciously had me into her apartment above the studio. She greeted me at the door and then, as if it was the obvious thing to do (and, as far as I was concerned, it was) she began to give me a tour of the work in the house which included many paintings, drawings and sculptures made by Jonathan, but also a few works by artists that were close to Jonathan, most notably Christopher Cairns and Bruce Gagnier.  After looking at the work we sat down for tea and a little history of Jonathan. From that conversation I remember her description of Jonathan's love of classical music, the piano and for Beethoven, specifically. And I recall Barbara's comments about how at the end of his life Jonathan worked very late into the night and while doing so listened to strange talk-radio shows, what she described as "Christian radio".

Upon entering the studio I was struck by the amount of work that was still present in this space that had not been used for many years. Barbara mentioned that it was more or less just as he left it, except she had recently swept up the plaster dust that covered the floor. One could easily imagine this room with an overwhelming amount of dust and debris as there was a lot of work in a relatively small space and the work was clearly made with some degree of violence and excitement.  I imagined piles of discarded sculptures, molds, shards, etc., that Jonathan would have turned to as his stockpile of materials. 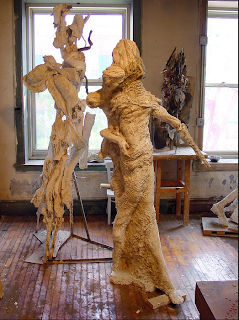 Barbara left me to look around. I had only ever heard about Jonathan and seen just a few of his sculptures, and so this was a large dose of the artist, all at once. There was writing all over the walls, oftentimes illegible. I recall making out some things about Rodin, something to do with Rodin's use of "color", meaning light, I think.  Most of the legible writing seemed over my head or hard to piece together its relevance to the work - it was very clear that Jonathan had a massive intellect. But the work itself is more often ruled by expressionistic desires.  Every part of the studio, including all of the work and even the lighting in the space, seemed to be perfectly aligned with the image I had in mind of what Jonathan looked like, his dark, wild hair and his serious eyes.

After looking closely at the many sculptures in the front room I went into the small back room where I sat down with the stacks of drawing pads that were there on a table. I flipped through hundreds of drawings, most of them very small, all of them careful and precise while maintaining a remarkable sense of spontaneity. Discovering the work in these drawing pads remains one of the most exciting and inspiring art viewing experiences of my life.

Two years later I returned to the studio to look again at the drawings and to take some photographs.  Two years later the front studio looked exactly the same, still preserving the point in time when Jonathan’s short adventure as an artist came to a relatively abrupt and maybe premature end.  By that time the drawings in the back room had been moved from the table into a closet. I shudder to think where the final resting place might be for these important and beautiful drawings. 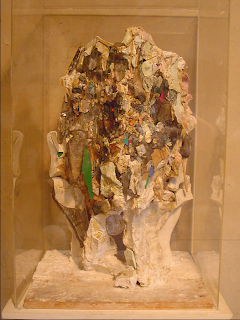 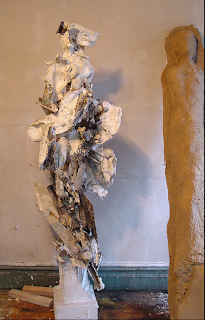 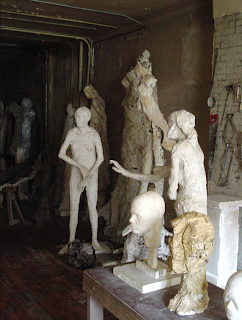 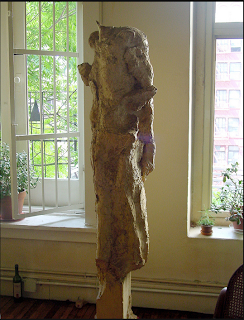 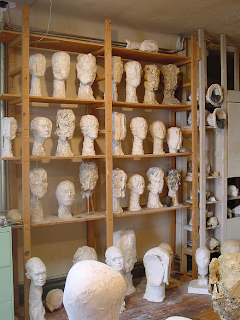 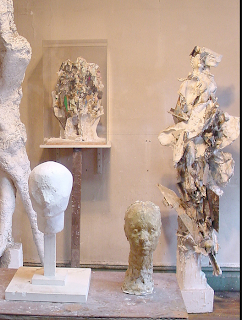 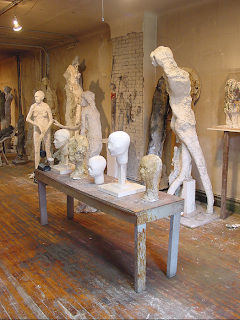 See more of Michael O'Keefe's photos of Silver's studio on our Flickr page.

Learn more about Jonathan Silver on his profile.