Reflections on Mike Price on the occasion of his show in St. Paul, MN, October 2015 // by Christopher Cairns 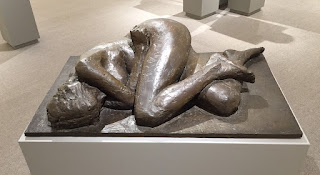 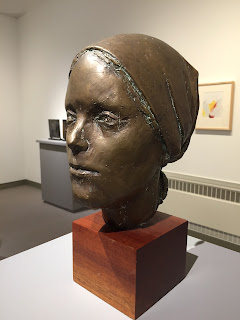 A centerpiece is a hanging shroud, or drapery entitled Artist’s Cloak. This is a simple but powerful expression, speaking of both presence and absence. Many of his small-modeled reliefs employ the use of drapery, heightening or shadowing events. Mike was a master of the use of drapery, presenting shrouds and modeled cloth in a most stately, almost majestic fashion.  Years earlier, I had worked with another modern master of drapery, Peter Agostini.  Agostini’s use of drapery was equally powerful, yet more dynamic and explosive. Take your pick. There is room for more than one. 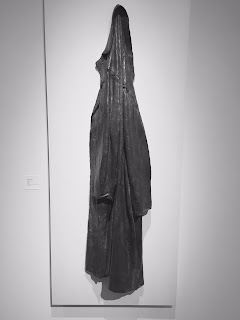 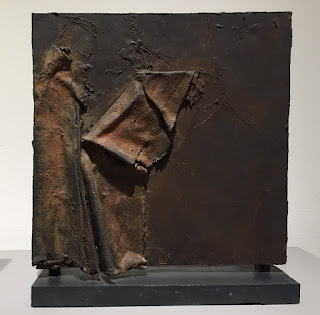 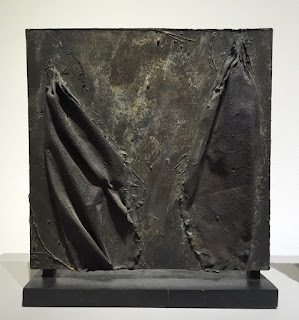 As with many good artists, as time went on, Mike’s sculpture became more complex. This complexity came from many different inputs or influences; not the least being Biblical or historical stories or figures. His spiritual thoughts also developed over these years and he spent time writing about his ideas and matching them to his sculpture and sculptural commissions. There are a number of small bronze plaques or reliefs. These are all masterworks, the entire lot of them, probably close to thirty. In this small format Price squeezes in all his sensitivity and attachment to the subject, with the most direct economy of means. These are in no way to be seen as sketches but instead as the clearest view into his own story-telling. Each establishes clarity regarding what sculpture means and what it can do at its most powerful. He took incredible care to match the color of these pieces to the subject at hand. I myself possess two of these pieces and they have engaged my attention for many years now. Without the slightest hesitancy in my mind, I see them as the works of a master. 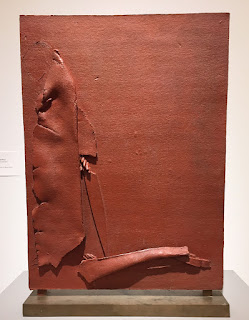 Missing from this show - by distance and their very size - are the major commissions, which occupied Mike in the latter years of his life. If I were to indicate a shortcoming in this show, it would be the absence of photographs of these pieces. An early example is at the Morris Arboretum in Philadelphia, a bronze couple, John and Lydia Morris, standing on a slight rise overlooking a field of flowers. Here too one of my sculptures, Stanchion, stands within sight of Mike’s fine pieces. 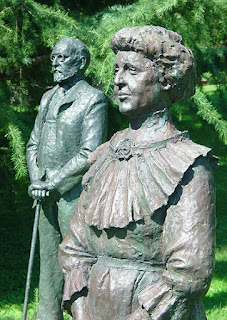 A number of these commissioned pieces reside around St. Paul and Minneapolis.  A nice long bike ride would allow you to see pieces at Koch Common, St. Thomas, Hemline, Minnesota Landscape Arboretum, Olivet Congregational Church, Plymouth Congregational Church, and Rice Park.
The best of these commissions, in my modest opinion, is the Scott Fitzgerald bronze in Rice Park, commissioned by Garrison Keillor.  The sculpture stands at eye level in a casual, yet formal pose. It generates a contagion of feeling for this author and his personality. The mark of a powerful sculpture is that the viewer wants to go back repeatedly. This certainly holds true for me. 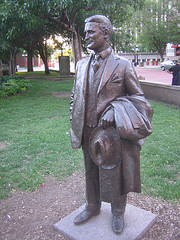 My son Nicholas spent the summer of 1997 casting this Fitzgerald piece with Mike. Thousands of dollars were spent on Nicholas’ education as Overland College (name changed to protect the innocent) but Nick’s real education took place that summer working with Mike Price. Nick even got to meet Garrison Keillor, which, fortunately, had no lasting effect upon him. Many other young artists and students can attest to the same “Mike Price imprint," as Mike was always open to such suggestions -and he needed the help, as his projects and dreams were always large. 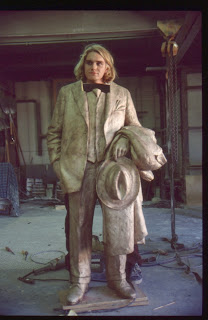 In this current show we get a glimpse of the larger commission through an exquisitely modeled Fitzgerald head, a study for the life size portrait in Rice Park. Those who love sculpture can recognize the DNA of the full-sized large piece embedded in this fragment (head). Stated another way, this head has the quality of revealing in the small the authority and completeness of the larger entirety. This bronze head made an appearance at the end of the film “A Prairie Home Companion”. One looks in vain for the attribution of this piece. 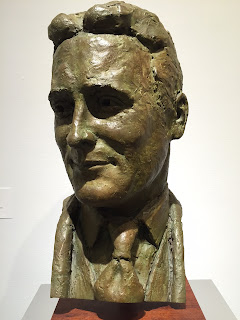 Mike was a complete artist in a manner that is almost incomprehensible today. His hand was on his sculpture from inception to completion. He took pride in casting his own pieces, always as original bronzes. I tried to encourage him to make editions, but he always said no, preferring to limit the production through direct original casts. For a long time I had squirreled away a set of slides of Mike working and casting in his foundry in the early seventies. I finally assembled them several years ago and they can be viewed on a separate post on this blog of my daughter Alexis.
http://artistprofilesproject.blogspot.com/2011/12/mike-price-at-work.html
Like many great artists, Mike had many influences, going back through the ages. His influences stem from all times and all places. He saw himself as part of a sculpture guild, stretching back for centuries. As a consequence of this, he was not concerned about so-called originality. Mike had little interest in commercial success beyond gathering enough money to embark on the next project. Ultimately he worked for a song, but the making of sculpture and the complete expression of his ideas was what fueled this man. He valued artistic friendship beyond artistic fame.
I want to return to this curious accessibility or likeability of Mike Price’s personality.  As far as I could determine, Mike set aside or did not employ judgment towards others. Things that would freak me out did not bother him. We were very different people. As a reasonable person might do, I tried hard to be more like him. Just in knowing him, Mike made me be a better person. I am certain that there are many others who would express the same sentiment. I suppose our relationship employed an equal exchange the other way, although Mike is no longer here to ask.
Mike’s natural generosity and good humor was tested to the extreme at the end of his life and beyond. A certain personage – a Leo something - took to disturbing Mike’s equilibrium and peace of mind. This person owed his job to Mike but, for this character, this added up to nothing. Instead it elicited a curious and dedicated animosity. This person was a muddle of a fellow. I myself would not believe such things happen, except that this phenomenon happened to me also – not once, but twice.  Individuals to whom I provided a lifetime sinecure found this insufficient and did everything they could to “pay me back”. Academia has its own code of behavior, which lies outside of the norm. There is no explaining it, but it is an unfortunate reality.  Is there another explanation to this strangeness? No, there is not.  As they say today, it is what it is. Thank heavens this dark shadow has passed – through “retirement” - and we get to glimpse, if only for the shortest period of time, a quite spectacular show. Don’t miss it.
When Mike was diagnosed out of the blue with terminal cancer, his response was immediate. He went back to work on a commission, saying to me, “There is no way this is going to kill me.” And yet as the cancer went to his brain, he described the phenomenon of shooting lights and showers of flashes with a detached marvel the likes of which I had never seen, nor encountered since.  He was a fantastic observer to the end.
Note:
In arriving at the gallery slightly after four, the day after the opening I was amused to find it closed. The inscribed sign on the door said, gallery hours, Monday to Friday 10-4. This must be designed to inhibit students from observing the art, as many are not out of bed by this hour. And what about people who work? Or people who can only come on weekends? I know a bunch. Further instructions on the door indicate that people under 12 are not allowed without an adult. My suggestion is to raise the age to 20 years, just to be careful.  Art can be dangerous to young adults. Further instructions allow for no backpacks, another dangerous item in this day and age. Unused space on the door indicates that there is room to add other impediments to viewing the art. Perhaps a trigger warning about sculpture would be in order, as this antiquated art and its powerful effect is unknown to the college-aged? God only knows what might happen. But this is American education at its best – absurd strictures, limitations, and rules.

Posted by Alexis Cairns at 7:39 AM