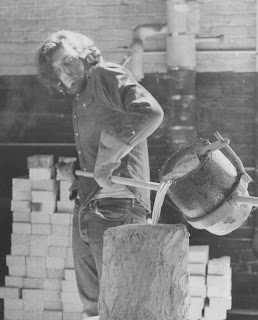 When I arrived at Oberlin College as a transfer student in 1963, David Carrow was a senior. I became aware of his existence, but never knew him well at Oberlin. He was part of a motorcycle club that included my brother Michael. David looked like Marlon Brando in the Wild One. David studied in the art department sometimes, mostly with the sculptor Norman Tinker, who was also my teacher.

In the fall of 1965 I went to Columbia for a post-graduate year to study or work with the sculptor Peter Agostini. In the spring of 1966, I went to a class and was startled to see someone across the room who looked familiar. It was David Carrow. I said to myself, oh shit here I am in NY and Oberlin is following me!  During the break, David came over, and started talking to me. We very quickly became friends, bound together by our mutual interest in sculpture.

At the time I was living in a medium-sized closet on 111th street. One day, David, seeing how I was living, invited me to share half of his 6th floor walkup on the lower east side at 122 Forsyth St. I remember clearly going downtown for the first time, coming up from the subway and seeing how bright and open lower Manhattan was. I quickly took Dave up on his offer and moved into the front room of a small tenement apartment. I paid $25 a month, which was better than the $100 for my uptown closet accommodations.

I spent the next six months in this apartment, mostly going in the evenings to the newly formed New York Studio School on lower Broadway, working in the day at Peter Agostini’s studio on 12th street and Avenue B.

Often in the evenings Dave and I would walk over to Chinatown to Dave’s favorite restaurant, Hong Hing, on Mott St. The first time that we went there Dave gave me instructions. He told me that they did not like “ghosts”. He explained the noodle soup menu and said that the price varied according to how they felt about the customer. Since Dave was a regular, he paid less. I paid more. Often the waiter gave you the soup that they wanted you to eat. The soup was great and for 50 years I have been looking for something that is as good.

Occasionally David would come with me in the evenings to the Studio School where he would work in clay from the model. Sometimes he would help on casting projects of Agostini’s. He was less responsive to Agostini’s dictates and criticisms than I. Consequently, Dave’s interactions with Agostini were limited, although, ironically, they continued into the future when he worked as Agostini’s assistant in Greensboro in the 1970s. I think Agostini had a mixed influence on David and his pursuits. Dave’s instincts appeared to be less inclined towards modeling and more towards welding and construction.

I remember well a typical exchange we had during these months of living together.

Chris: Where are you going?

Chris: What are you doing?

In the summer of 1966 Dave and I rented a studio on the Bowery. The studio belonged to the painter/sculptor Peter Pinchbeck. Dave and I worked in the studio every day during a very hot summer. We would sit out on the fire escape, drink beer and watch the old men stagger across the Bowery, often standing very tipsily on the center island divide, cars whizzing by in both directions. At night we had a drawing group, working from the model, which included Margo Martin, Jonathan Silver, Bruce Gagnier, Lance Solaroli and others.

David worked all summer on a seven foot high piece made out of concrete, metal pieces from the street and other objects. The base was fashioned with pieces of stone. I think Dave had James Wines’ sculpture on his mind. When it came time to vacate the studio, Dave dismantled the base of the piece so that a number of us could carry the heavy upper part down to the street and around the corner onto Bond St, where Dave re-cemented the base in place and chained this impossibly heavy piece to a lamp standard with an industrial gauge lock. We waited and watched for days, but the task was above the pay grade of the trash removal people. The piece remained as part of the neighborhood for about two years, when someone finally tackled the removal job.

One day, Dave, I  and Jeff Armistead were making pancakes on a Sunday morning at Jeff’s place on Eldridge St. It was a lovely spring day. Since Jeff lived on a front ground floor apartment we decided to open the front window and offer free pancakes to the neighborhood kids through the window bars. A bunch of kids showed up and we quickly ran out of pancakes, just as more kids were showing up. We closed the window after announcing with a sign that we would be having free pancakes the next Sunday at 11am. The kids continued to rattle on the bars and window for some time until they got discouraged and melted away. We got prepared for the next Sunday with a large batch of pancake mix. Jeff was startled awake at 10 am with noisy banging on the metal gates. Soon Dave and I arrived, but we were a bit taken aback by the size of the crowd. We furiously made pancakes and tossed them out the window to our new fans. Again we underestimated the demand and quickly ran out, having again to close the window. Dave and I had to stay inside for some time until the crowd dissipated and we could safely leave. We were slowly learning what it meant to have an audience and none of us were very enchanted with the idea. Two mornings of free pancakes were enough to discourage us. We did not put out a sign this time but Jeff made the mistake of shouting out, Come back next Sunday! In the meantime, we agreed that this project should be terminated. Crowds gathered for several more weeks on Sunday morning, but Jeff only sat and endured the banging and shouting.

When Agostini moved his 12th street studio to Greene St, Dave took a set of fantastic photos of the studio. They are viewable on my daughter’s website.

Years later David gave what I took to be his ultimate assessment of Agostini: “If you want to get ahead in life, watch closely what Agostini does - and do the opposite.”

Dave went to Vietnam and I was drafted. We would write letters back and forth. One week Dave was able to go to Hong Kong on R&R. Margo’s father was US Consul General in Hong Kong. Margo’s parents were very fond of David. He stayed with them at the Consul General’s residence, up on The Peak overlooking Hong Kong.

Dave and I remained close though the 1970’s. Dave was in North Carolina, while I was teaching at Haverford College.

Dave was close to all three of my kids. He very much liked to torture my sons, especially Nicholas, wrestling with him on the floor. Peter was younger - Dave would hold Peter upside down over the cat pan.

In 1977 Dave had a terrific show at Haverford College. This included larger outdoor pieces on the campus, including “Big Arc”, “Circles and Cylinder”, and “Orange Sucker”, and the astonishing “Terrathopter" in the college gallery, along with other pieces. I think this was Dave’s first show. One of the outdoor pieces, “Big Arc”, remained on the campus for about ten years, until it was removed for “the usual reasons.” 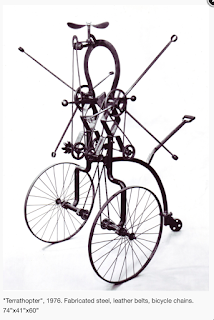 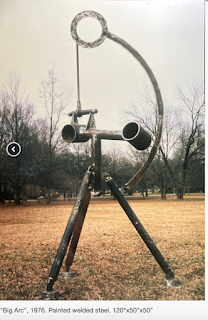 Sometime later, “Nonayet” was installed near the Foundry. It remained there until I retired. 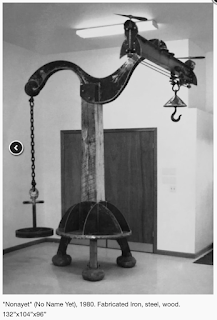 In the early 1980’s Dave facilitated my meeting Herk van Tongeren and Issac Witken. Herk invited me to be a visiting artist at the Johnson Atelier, several years that were the most productive and enjoyable of my life.

One day Dave told me that he thought that artists were “deficient, incomplete people,” as if they were people who had holes in them. He felt that they made art to try to make themselves complete. This thought struck a chord in me, and I have repeated it many, many times.

Dave and I continued to have regular exchanges, either in person or on the phone. We continued to try to help each other. Dave helped me in so many ways, and I know that he also did this with others. He was flat-out generous.

Dave had a second show at Haverford in 1995, at the Cantor Fitzgerald Gallery. This show included “Autobiography”, “Resolve”, “Detent”, and “Double Bit Table Lamp”. It also had an installation. I am not sure if Dave took pictures of the installation in this show.

Soon thereafter Dave got sick from his exposure on the Mekong River. A number of us ferried him to Sloan Kettering to get treatment. He was his usual tough self in dealing with this illness. I remember bringing him back one day from radiation treatment. His doctor would set the number of times for radiation treatment and then move the goalpost. He said that they just gave as much radiation as he could take. The heavy doses of radiation along with an experimental cobalt implantation saved his life.

I was surprised that Dave went back to work at the Atelier. Dave had his own ideas about this and he was right. He caught a big break and snagged Michelle. Michelle was what Dave had previously been missing, and he appears to have been an individual with a bifurcated life, the second half building on and surpassing the first.

Dave was a gifted artist. He developed in his own way, with various early influences. I remember going to the World’s Fair with him and looking at Agostini’s fantastic “Windy Summer Day”. We visited many galleries and shows together. Dave showed an inclination towards Richard Stankiewicz, Raoul Hague, Reuben Nakian, Bruce Conner, Ed Kienholz, Joseph Goto, 1950’s David Smith, Simon Rodia, Stephano Cusamano and Marisol. His strongest affinity was with H.C. Westermann. I think Dave was attracted to these artists’ individualistic and somewhat offbeat/obscure temperament. 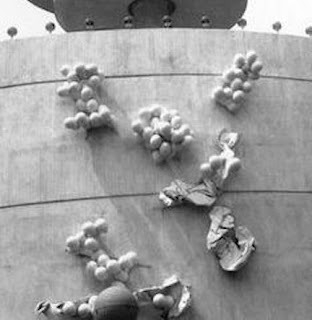 At the same time I think Dave felt himself aligned with the larger tradition of metal sculptors. Certainly his time at the Johnson Atelier allowed him regular contact with other serious artists working with metal, among them Larry Steele, Herk van Tongeren, Issac Witkin and, most importantly, Mel Edwards. 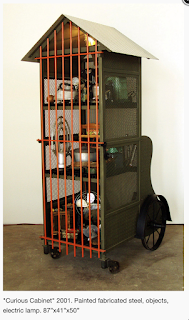 Dave himself spoke little about his motivation in making sculpture. In presentations that I observed, Dave kept things simple, with no grandiose statements about the purpose of art, either his or others. One can get the sense of his aesthetics by reading the “Rant” section on his website.

Dave Carrow’s sculpture was thoroughly conceived and well-wrought from the very beginning. Dave made a habit of making complete, somewhat hermetic sculptures. The mature pieces tend towards the hierarchic or totemic. Each sculpture provoke a complex set of feelings, from the playful, to the whimsical, to the mysterious, to the truly enigmatic. The viewer is sometimes invited to participate with moving parts, often non-functional. At other times, the visitor is ‘screened out” by objects in cages or behind screens, The objects that fueled his sculptures were  all “collectables”, shards or pieces of metal gathered from his surroundings, work or junk yards. Dave had a way with devices and mechanics and it clearly shows in his sculpture. Each sculpture had a distinct personality, often enhanced by color, and each invited close viewing. The sculptures all have a great sense of nobility. 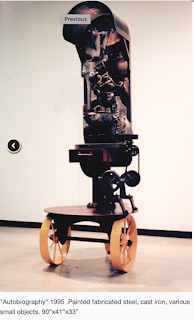 When the catastrophe of my daughter’s illness descended upon me, I gradually lost contact with David. l regret this. David was a fine person and a terrific artist. 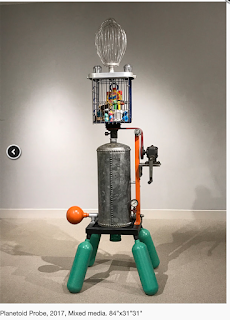 More photos of sculpture can be accessed on davecarrow.com