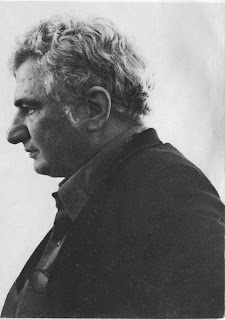 George...was a man of eloquent silences. His work breathes with the eloquence of his muteness. (Elaine de Kooning, 1978)

Torso, 1968, 21"h, bronze
George Spaventa was a thoughtful, somewhat reclusive artist who claimed that the ideas for his sculpture came to him in dreams. He was born in New York City in 1918, where he studied as a teenager at the Leonardo Da Vinci Art School. After serving in the military during World War II, Spaventa studied art in Paris on the G.I. Bill. There, he worked with Ossip Zadkine, visited Brancusi in his studio, and had the good fortune of meeting Giacometti, one of his great influences.

Spaventa's work was small, intimate, molded by hand in clay or wax and later cast in bronze. Besides Giacometti, his influences included Medardo Rosso and David Smith. In a 1964 Art News review of Spaventa's first and only New York solo show during his lifetime, his good friend, the poet Frank O'Hara, described his work:

In Spaventa, the emphasis is on the hand, and handling. With the single exception of Nakian, it is difficult to think of an American sculptor who has insisted more upon the imprint of his finger, thumb, wrist and arm. Sensitivity to the material is there, but first and foremost the material itself is required to be capable of sensitivity to Spaventa.

Head, 1955, 17"h, bronze
He was a methodical worker, not particularly prolific, and it wasn't until he was in his mid-forties that he had his first solo show, the first of just two. His work was exhibited in a number of group shows, however, in the 50s and 60s, including the Annual Exhibition 1962 at the Whitney Museum, and an exhibition entitled, Four American Sculptors, which also included Peter Agostini.

Spaventa was especially well liked and admired by many sculptors and painters of his time. He was particularly associated with a group of artists who worked on Tenth Street in New York City, and developed what came to be identified as the "Tenth Street Style." They included, among others, Milton Resnick, Earl Kerkam, Franz Kline, Peter Agostini, and Willem de Kooning, with whom Spaventa was sometimes compared, and who once said about him, "When I look at George's sculptures, I wish I had made them myself."

Spaventa was one of the founding faculty members of the New York Studio School, where he taught until he died. Students remember him perpetually encircled by a cloud of smoke, ashes dropping from the lit cigarette in his mouth onto the clay as he rearranged their pieces with crushing movements and inarticulate grunts.

Spaventa found verbal expression difficult and would demonstrate with his hands and whole body in making a point. During the late 70s he would often comment on the work of Matisse, Michelangelo, and Brancusi using the words "oneness...plasticity..." over and over. He spoke about visiting Brancusi on Sundays when all the artists opened their studios. He once asked Brancusi about The Endless Column. Brancusi answered only by breathing deeply. George interpreted this to suggest that the column was about breath. He would often refer to a picture in the Matisse Sculpture book of Jaguar Devouring a Hare after Barye. He would demonstrate how Matisse simplified the thrust of the jaguar by drawing his finger (with dry clay on it) along the form on the page. I am sure that that streak of clay is still on the book in the Studio School Library. (Scott Sherk, 2006)

Despite the public nature of his teaching life, Spaventa spent much of his time alone, in a life dedicated to art. He died of a heart attack in his studio in 1978. His work has been shown just twice since his death.

Figure #1, 1963, 13"h, bronze
I originally wrote this essay for the 2006 catalog for Five Sculptors, an exhibition of work by Peter Agostini, Christopher Cairns, Bruce Gagnier, Jonathan Silver, and George Spaventa.

Posted by Alexis Cairns at 1:02 PM