You can look all you want to on the internet, but will find very little about the painter Earl Cavis Kerkam. And what little you do find will be deeply unsatisfactory. There are biographies on Artnet, etc. (if you want to pay for them) listing general dates, events and places--all of which are of little interest. 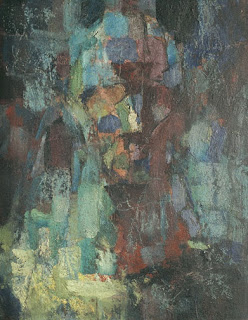 I saw my first Kerkam painting in the early seventies in a show at the New York Studio School on 8th Street.  It was a small oil, an abstract frontal head from the early sixties. The painting belonged to the Poindexter family who ran the Poindexter Gallery in the 1950’s and 60’s. This gallery showed Earl Kerkam as well as George Spaventa. Years later, in 2005, I got to show one of my sculptures in a show at the NYSS which included this very same Kerkam painted head. At that time, as well as 35 years prior, I wanted to steal this little beauty. This particular painting, in and of itself, puts Kerkam in the top rank of American painters of the 20th century. Check out some of the others. Forgotten though he is, Kerkam had some extraordinary strengths.

In the early 1970’s, my friend Jonathan Silver and I were both working on frontal sculpted (and drawn) heads. I told him about the outstanding little painting at the NYSS and together we took a look. This little Kerkam head had a big effect on us both. Of course there were many other things that we also had on our minds during those years, including Roman heads, Medardo Rosso, psychoanalysis, Hans Holbein, Giacometti, Ernst Gombrich, Ernst Kris and F.X. Messerschmidt. But this head had a big impact on both of us.

Earl Kerkam lived in New York and Paris. He had a regular job for many years and also a wife and three kids--and then, a la Gauguin, he abandoned his family and spent the rest of his life painting, seemingly on his own.  Two articles in Art News, one by Elaine de Kooning (“Kerkam Makes a Painting”) and one by Louis Finkelstein, make unsuccessful stabs at shedding light on this artist. There are a few catalogues of his work, principally one from a 1966 memorial show at the Washington Museum of Modern Art, now long since defunct.

For a clearer idea of this artist, one must go to the paintings themselves (and photographs of the artist in his studio) along with a few quotes and anecdotes that can be retrieved from the scrapheap of history.

Pictures show Kerkam painting, shirtless or in an old-fashioned undershirt, in a dilapidated and disheveled studio, often with a model. Various photographers took pictures of him, and a number can be seen in the records of the Archives of American Art.  No one knows how he managed to make a living. His friends Pollock, de Kooning and Kline saw him as uncompromising. Pollock is said to have waved a postcard in the Cedar Tavern one night declaring, “Earl says that I’m not bad!” (This postcard came after Kerkam had seen a Pollock show in Paris.) Franz Kline said that “Earl could paint in a telephone booth.” 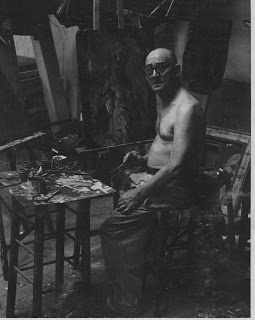 Kerkam had a curious approach to painting. Often using a model, he might start with a voluptuous female model and by the time the painting was finished it would have morphed into a strong male figure.  He seems to have had a generalized idea of the figure, perhaps derived from his own physique. On the other hand, his portraits of the 30’s and 40’s often have a very specific look, as if they are particular people. It is interesting to learn, however, that he often used multiple models for the same portrait, so the specificity very well might have been a conglomeration or synthesis of their individual attributes. In this way he was a bit like Sherwood Anderson. Kerkam himself said, “I try to paint a construction instead of a sensation.” Earl Kerkam was obsessed with painting. “I can’t talk French, but I can paint French,” he liked to say.

One finds this on the Mercury Gallery site:

“An artist must get rid of all encumbrances,” [Kerkam] told a friend. His apartment was “so sparsely furnished," wrote Finkelstein in Art News, “that it did not look furnished at all… There was a broken-down cot with a slab of foam rubber… [and] a bucket  for washing his clothes (which he sometimes let burn on the stove while he was painting)"... Once, a Seattle heiress arrived with $1,000 to have Kerkam paint her picture. He opened his door a crack, gave her the once-over and said: “You're too pretty. Go away.”

On a more obscure website is this: “Earl Kerkam was holding court at his one-man show at the Bonestell Gallery. He was complaining that some of his models refused to pose in the nude…'Well paint them with their clothes on!' someone said. 'That’s no good,' answered Kerkam. 'Painting a woman who won’t take her clothes off is like interviewing a woman who won’t tell the truth.' Max Weber hit the nail on the head when he said: “Kerkam has more art in a stroke than most men get in a whole painting.” One can see this written all over his paintings. 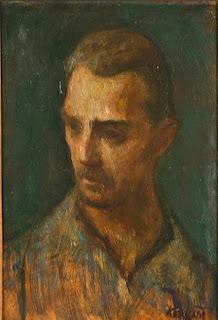 Kerkam showed at the Poindexter Gallery, the World House Gallery and the Charles Egan Gallery. Galleries were different in those days. Artists did not snivel at the feet of the gallerist, as is now the practice. A gallery director or owner like Charles Egan or Stephen Radich or Curt Valentine took a direct personal interest in their artists. The relationship was partly business, partly personal, a far cry from the strictly commercial business strictures of today. Egan would support his artist whether or not she or he sold, and sales weren’t common. In other words, he gave them a modest stipend. Poindexter must have done the same.

People can make all the excuses they want--about why things were the way they were then and why things are the way that they are now--but these are only hapless excuses masking a deep and unabiding lack of aesthetics and feeling on the part of all contemporary gallery owners. In the 1940’s and 50’s, gallery owners would take care of their artists. Later, in the seventies, newer owners really learned to “take care” of their artists.


Earl Kerkam died at the age of 74 in 1965, shortly after beginning to teach at the newly formed New York Studio School. Mercedes Matter thought he would be a good teacher but he did not live long enough for anyone to find out. The painter Chuck O’Connor has fond memories of Earl Kerkam in the fall of 1964. I either did or did not meet Earl Kerkam, although I like to think that I did.

After all is said and done, we have to let the paintings speak for themselves and rely on the audience to establish the necessary context for these works--if that is possible in this day and age.

After Kerkam’s death, Zabriskie Gallery had a show of his work. Hilton Kramer, the vaunted art reviewer for The New York Times, led Kerkam on his way to oblivion with a review entitled "Earl Kerkam: A Sensibility Unfulfilled; Late Painter's Work on View..." You can look up the review and pay to read it, but why bother? Kramer did the same shit with Peter Agostini. This guy Kramer was the worst--and he did a great deal of damage.

Earl Kerkam Show: Elegant Fleshiness
The Philadelphia Inquirer--Sunday, November 12, 1967
The Earl Kerkam (1891-1965) show at Johnny Aiello's “Gallery Pane Vino,” 20th Street at Pine, must surely be one of the best contemporary drawing exhibitions displayed in a gallery here. These 62 drawings have been lying unseen, mostly unknown except to a few scholars, and they come from the only large source of supply of the artist's work--a collection of about 400 drawings and 200 oil paintings belonging to his son, E. Bruce Kirk, of Chestnut Hill, who displayed a few of the paintings at Wanamaker's last season and will show a larger group of the oils at New York's Zabriskie Gallery in January.

The drawings are nearly all spontaneous, unpretentious studies of the nude female figure and were created around the early 1950's as notes of fact and ideas rather than as developed essays. In their concentration of the artist's style, the few swift, decisive lines with a brush, chalk and watercolor speak with a personal intensity that tells us more than his painterly Cubist self-portraits or even his sensuous still lifes. And the finest of them have a weight, a sense of fleshiness and elegant informality of line that swing their lift into high art. Since drawings are an art for close-range inspection, the close grouping here, sometimes in double rows, favors them. This small gallery must be congratulated on its initiative in organizing the present show--a step that should long since have been taken by some of our more august institutions. It is also worth remembering that at the time of Kerkam's death, his friends de Kooning, Guston, Rothko, Spaventa and Vicente petitioned the Museum of Modern Art to plan an exhibit in honor of this man who "in our eyes is one of the finest painters to come out of America."

I was always struck by the disconnect between Kerkam’s painting and his drawing. His drawings were appealing to many people, but I always found them preposterously stylized compared to his painting, which show much more uncertainty and a shifting decisiveness.

Today, older paintings of Kerkam's from the 40’s and 50’s occasionally show up on the internet or in obscure auctions. I purchased two portraits, one male, one female, each for under $225. Kevin Tuttle bought his fine portrait for about the same amount. 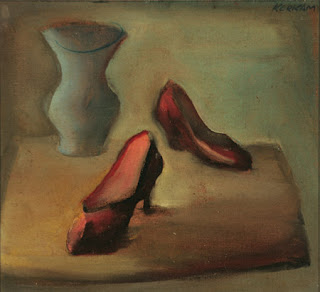 At the opening of a retrospective show at the World House Gallery in NY in 1963, a friend asked Kerkam, “Where are all the people?” “They’ll come when I die," Kerkam replied. “I’m not a fashionable man.” As Earl Kerkam recedes slowly into the mists of time, we can now guess that he was incorrect in his assessment of impending fame. His most recent auctioned painting, a small abstract head from the 1960’s, fetched $700. 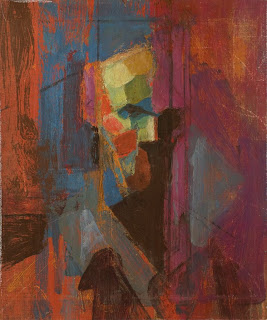 See additional photos of Kerkam's work on our Flickr page.

Christopher Cairns is a sculptor and Professor Emeritus at Haverford College.  See his work online at www.christophercairns.com.

Posted by Alexis Cairns at 8:51 PM