The event, which attracted people from as far away as Massachusetts and Washington, DC, featured sculpture, painting, drawing, film and music.

On display in the multi-room studio were 25 paintings by Nicholas Cairns—including Dies Irae (2009) and Wreckage of Flowers (2009)—20 small prints and about 10 drawings. 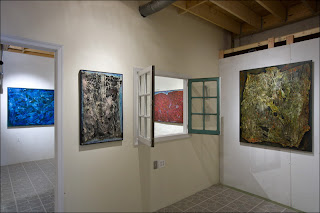 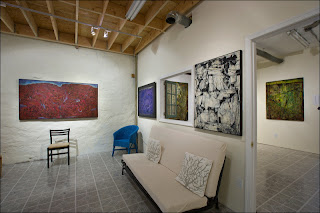 Christopher Cairns presented a near-final version of his Rochbergtorium, an installation honoring his late friend, the composer George Rochberg.  Arranged in a 250-square-foot, skylit room, the Rochbergtorium included 25 sculptural heads of the composer in assorted sizes, styles, and mediums, a 12-minute video interview of Rochberg by Peter Cairns, and a small desk with scores, books and photos.  A recording by Peter Sheppard Skaerved of Rochberg’s Caprice Variations played on a continual loop. 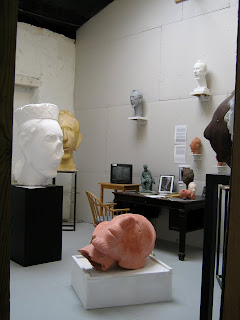 Elsewhere, Peter Cairns’ 2009 film about an NGO in Haiti, made just five months before the 2010 earthquake, played in a makeshift screening room in one corner of the cavernous studio.

Prints, drawings and watercolors by Alexis Cairns (yours truly) capped off the largely family affair.

A highlight of the event was the May 1st performance of Michael Hersch’s Sonatas No.s 1 and 2 for unaccompanied cello, played by frequent Hersch collaborator Daniel Gaisford. Of Gaisford, Jay Nordlinger wrote in 2008, “In Daniel Gaisford, Hersch has found an ideal interpreter, an ideal exponent . . . Gaisford has a formidable technique and a formidable mind.  He can make a hundred sounds: fat, thin, spiky, lyrical, rich, sickly, piercing, warm, and Hersch’s sonatas call for a great many of them.”

In a surprising coincidence, a review by Vivian Schweizer of the recording of Hersch’s cello sonatas, played by Gaisford, was printed in the New York Times on May 2nd.  It read:

Michael Hersch’s Sonata No. 1 for unaccompanied cello is one of his earliest published works, written when he was 23, in 1994 . . . The sonata’s profoundly solitary, rhapsodic first movement veers between yearning lyricism and agitated outbursts. The reflective second movement, a showcase for Mr. Gaisford’s rich, penetrating tone and searing musicality, ebbs and flows into the harmonically rich final movement, with its virtuoso challenges and almost brutal intensity . . . Mr. Gaisford, who, to judge from this recording, deserves greater recognition, also offers a mesmerizing performance of Mr. Hersch’s seven-movement Sonata No. 2, composed in 2000. 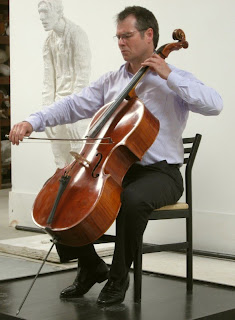 The intense 70-minute performance took place in a 2,500-square-foot room in the center of the studio building, in front of an audience of about 75. 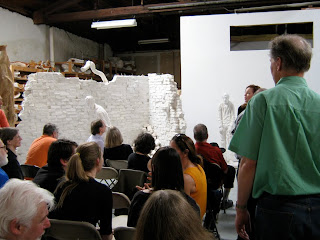 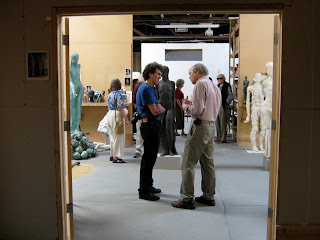 
NOTE: the Havertown Studio Open House (now called the Havertown New Music and Art Series) has become a regular event.  Join The Artist Profiles Project on Facebook to be notified of future dates.
For more photos of the open house please visit our Flickr page.